HOW TO RUN AND HOW I CURED MY PLANTAR FASCIITIS
FIGURE 1: A STEP-BY-STEP DESCRIPTION SHOWING IN GREEN WHAT PART OF THE FOOT GRABS THE GROUND AT EACH STEP OF THE CYCLE. 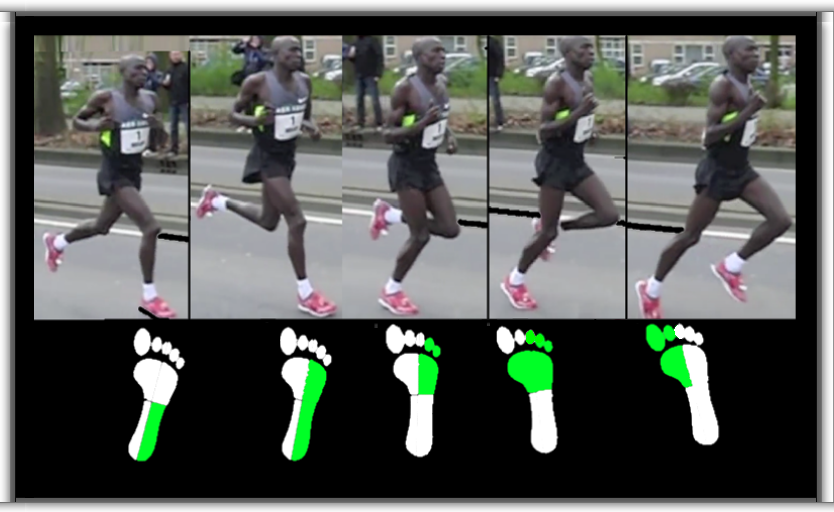 WARNING: THIS ARTICLE IS MEANT FOR BAREFOOT & HUARACHE RUNNERS ONLY

By leaning slightly forward, your center of gravity inevitably forces your legs to step in, to prevent you from falling. If you aim those steps in a way that allows the body’s fascia to coil and uncoil like a spring, your running efficiency increases in orders of magnitude. Aiming your steps in a specific manner initially requires total focus and concentration. Yet, over time the body takes to it naturally. Below is a step-by-step description of how to aim those relatively “forced” steps, in a way that achieves higher running efficiency.

While keeping your center of gravity forward, make sure your shoulders are fully frontally facing, and swing your arms back and forth as if you were throwing punches in coordination with the opposite foot you switch into, as you step into the following cycle:

Long story short if you wear shoes from the time you are a toddler until after adolescence you are now saddled with an atrophy of the tendon that connects your big toe with the heel. Getting that tendon fully functioning again takes two to three months of walking barefoot and using toe separators such as these for a couple of hours a day until you can eventually use them for walking, but that will take a least two more months of wearing them for a few hours and performing daily your toe-spreading exercises, until you can begin running again (2-3 months). For further details and daily running inspiration, you're welcome to join our Huarache Runners club.

Posted by Oswaldo Lairet at 4:52 PM