Tank: "So what do you need? Besides a miracle"

Morpheus: Globalization "is the world that has been pulled over your eyes to blind you from the truth"

Agent Smith: "There is a difference between knowing the path and walking the path": While productivity doubled over the past 40 years and the world's total wealth quadrupled (see "Who Benefited..."), real wages for western manufacturing workers have stayed below their 1973 peak, after growing exponentially for the previous 30 years! (chart) 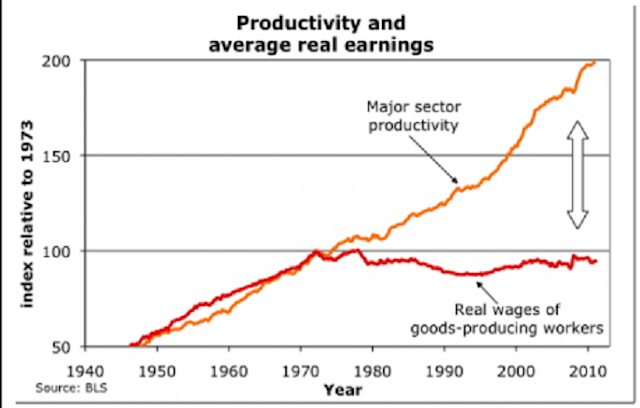 Morpheus: "What you know you can't explain, but you feel it. You've felt it your entire life, that there's something wrong with the world. You don't know what it is, but it's there, like a splinter in your mind, driving you mad"

Neo: Well, guess what? I know what it is! We produce $17 trillion in annual GDP, while our $60 trillion (total) debt grows exponentially, hiding that we've never really benefited from globalization's amazing productivity gains, we've only become addicted to debt-driven consumption for the benefit of our Matrix slave masters!

Cypher: "You know what I realized?
[Takes a bite of steak],Ignorance is bliss"


Agent Smith: "Do you hear that, Mr. Anderson? That is the sound of inevitability"
Posted by Oswaldo Lairet at 4:51 AM 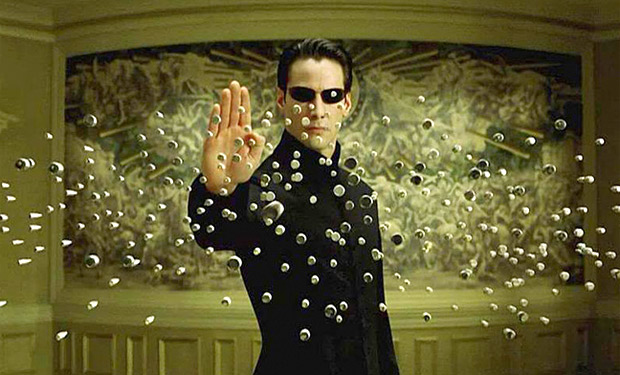 Below, I review four precepts collected over a decade seeking answers to the "Simulation" dilemma presented by Matrix (1999) and accidentally... Finding (stumbling upon) them, in the least expected places: Appendix B.

For instance, upon learning that sensory adaptation makes our perception (sight, hearing, taste, smell, and touch) highly prone to manipulation, I keep aiming to detoxify my sense of taste, knowing it embeds the food choices and ultimately the lifestyle diseases, we think our own, unaware that our Matrix-like “Sensory Masters” ingrain them in our brain since infancy.

In 2009, after years of research, but mostly by trial & error, I found Fuhrman’s Health = Nutrients Per Calorie approach and the simplest way to execute it: G-BOMBS. Since then, I discovered five other pioneering MDs (Appendix A) whose work confirms or precedes Fuhrman’s.

On the other hand, what led me to these findings was the present era of nearly-free access to information, made possible by Tim Berners-Lee and our Matrix-like complex. So, while the Internet does spread a million lies, when carefully vetted, today’s infinite information bounty gives you a degree of control over your destiny, no previous generation ever had... Or, it can turn you into a slave to the myriad addictive virtual worlds, whose food is your existence.
Love,
Dad


The Animal Brain Rules... And all this time, you thought it was you, right?
The Amygdala, our brain’s most “primitive” structure, controls what has been variously defined as our: Animal, Subliminal, Visceral, Irrational, Innate, Emotional, Subconscious, or Intuitive... Mind (millions of years old).  Since the invention of fMRI in the mid-nineties, brain-map evidence confirmed (Mlodinow) that our animal brain, though patently nonverbal, is vastly more powerful in dictating our actions than our conscious mind (below 100K years old). Yet, like chimps and other intelligent animals, it can be trained with precision without it truly understanding its own behavior.

Meet The “Sensory Masters”... They have already met you!
The minute you realize that your Limbic System may have been trained (coded) by others, without your explicit consent, you understand why we are so prone to sabotage new-year resolutions involving food, drink, exercise, etc. Despite any self-control we may have, our conscious brain is at the mercy of our animal brain's earliest and most frequent perceptual experiences. Fittingly, for 100s of years, the industrial complex has been training our early perceptions so they can groom us for a lifetime addiction to foods, drinks, pharmaceuticals, video-games, TV series, running shoes and other "sensory-capture" or “fake common sense” junk formulated to harvest our animal brain's Pavlovian response at a global scale. Thus, as ‘life-expectancy’ rises among an ever-larger number of disease-ridden, co-existing generations, billions of "human batteries" inadvertently power our Matrix as the Wachowskis portrayed it, in 1999.

Brainwashed... From Cradle to Grave?
Acting through our parents, extended family, schools, communities, etc. (Unbeknownst to them) and perpetually through mass media, our “Sensory Masters" govern the switches to our visceral responses. Quite simply, throughout childhood and adolescence, our taste buds, olfactory glands, tactile sensation, and other body receptors are intentionally trained to prefer certain flavors, colors, textures, aromas, sounds, etc. Hence, each human generation is more like a valuable crop, whose life-cycle at each stage is guided to become subconsciously addicted to products they "love" even if consuming them may at first cause minor consequences, such as chronic colds/fatigue, acne/skin-rashes, headaches, bad grades, etc. to eventually major ones, such as school/job loss, obesity and degenerative diseases such as arthritis, diabetes, heart/brain stroke, cancer, Alzheimer's, etc. (Appendix A).

The Matrix... Wants You!
Unfortunately, enslaving our animal brain requires Sensory Masters to engage primitive instincts and survival adaptations essential to our ancestors at some point beyond 10,000 years ago. The funny thing is that our conscious mind truly believes it can decide to quit the addiction if it “really wants to” and thus, blames itself for suffering the consequences of “enjoying” their products. Meanwhile, the culprit profits copiously and undetected, be it the food, pharmaceutical, beverage, entertainment, gambling, or other industries. On top of it all, highly-educated specialists share in the scheme by selling us surgical procedures, cosmetic solutions, drug therapies, biased or bogus research, and other fixes to temporarily mask the symptoms and true causes of the myriad diseases caused by their sponsors.
Conclusion... Hack The Matrix!
Nothing surprising here, just ordinary human nature. The good news is that once you realize that: A. Your animal nature is infinitely more powerful than your human one, and B. Someone else is exploiting it for his own benefit at the expense of your life, you might as well: C. Retrain The Beast! Retraining an animal is never easy, especially if addicted to stuff most think is cool or even necessary. Yet, through Knowledge (start with A & B), your conscious mind can reprogram that powerful being inside your head, wrest control from the Sensory Masters and grant you the balance of power in The Matrix!

Posted by Oswaldo Lairet at 3:36 PM